Managing pain in a patient with pancreatic cancer

This is the case of a 53-year-old married male with children who sought consultation for progressive abdominal pain in April 2014. The pain had been present for 1 to 2 months prior to the consultation, and was previously diagnosed by other doctors as pain due to gastritis. The patient described the pain as severe, giving it a score of 7 to 8 on a numerical rating scale of 1 to 10. Esophagogastroduodenoscopy was unremarkable, but CT scan revealed a pancreatic tumor with liver metastasis and mild ascites, which was inoperable due to celiac plexus infiltration and secondary lesions in the liver. Pain management was initiated using oxycodone 10 mg controlled-release (CR) tablets twice daily and oxycodone 5 mg capsules as needed. The patient was informed of possible side effects such as dizziness, nausea, vomiting and constipation. Metoclopramide and a senna-based laxative were prescribed for nausea and vomiting, and constipation, respectively.

Pain intensity improved from a score of 7 to 8 initial consultation to 4 after 3 to 4 days of treatment with oxycodone. Two weeks after radiotherapy, pain intensity further reduced to a score of 2. The dose of oxycodone was reduced to one 10 mg CR tablet daily at night time. Oxycodone 5 mg capsule was discontinued and replaced by an NSAID taken as needed during daytime.

During follow-up visits every 1 to 2 months, the patient reported only mild pain. He is now receiving gemcitabine as single-agent chemotherapy at a public hospital. 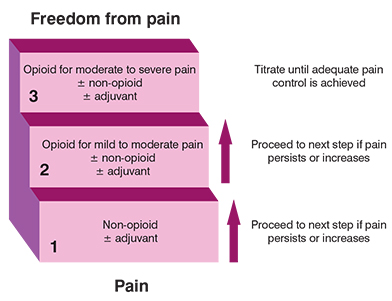 Pain is one of the most common symptoms experienced by cancer patients. It has been estimated that approximately 50 to 70 percent of patients with cancer experience some degree of pain, which usually progresses and intensifies as the disease progresses.¹ One study noted that the incidence of pain in patients with advanced stages of invasive cancer may be as high as 80 percent. The incidence can be as high as 90 percent for those with metastases in osseous structures.² However, more than half of cancer patients have insufficient pain control. Severe pain can significantly impair patients’ quality of life and interfere with their physical rehabilitation, nutrition and mobility. Furthermore, a large number of cancer patients suffer from depression.³

Several practice guidelines on pain control have been formulated. The most widely used algorithm in the management of cancer pain is probably the one formulated by the WHO, called the WHO cancer pain treatment step ladder. These guidelines recommend the use of paracetamol or NSAIDs as an initial step in pain management, followed by opioid analgesic for mild to moderate pain, and strong opioids for moderate to severe pain.⁴ (Figure 2) However, some experts have stated that the WHO guidelines may be inadequate to address current needs and suggested the addition of a fourth interventional step in the form of nerve blocks, intrathecal delivery systems, or surgical procedures.

Oxycodone is a synthetic opioid metabolized to its active metabolite, oxymorphone, in the liver. A comparison of oxycodone CR and morphine demonstrated similar analgesic effects between the two drugs. However, there were significant differences in pain control for patients with underlying renal or hepatic impairment receiving oxyvodone.⁶ although oxycodone is generally more expensive than morphine, it has proven efficacy in treating moderate to severe pain, and its CR formulation allows for the convenience of 12-hour dosing intervals.

The use of opioids, though often perceived to be associated with palliative care, plays and important role in pain management. In the case of our patient, it resulted in satisfactory pain control and improved quality of life, enabling him to undergo and tolerate subsequent chemotherapy, which can potentially control the disease and prolong survival. 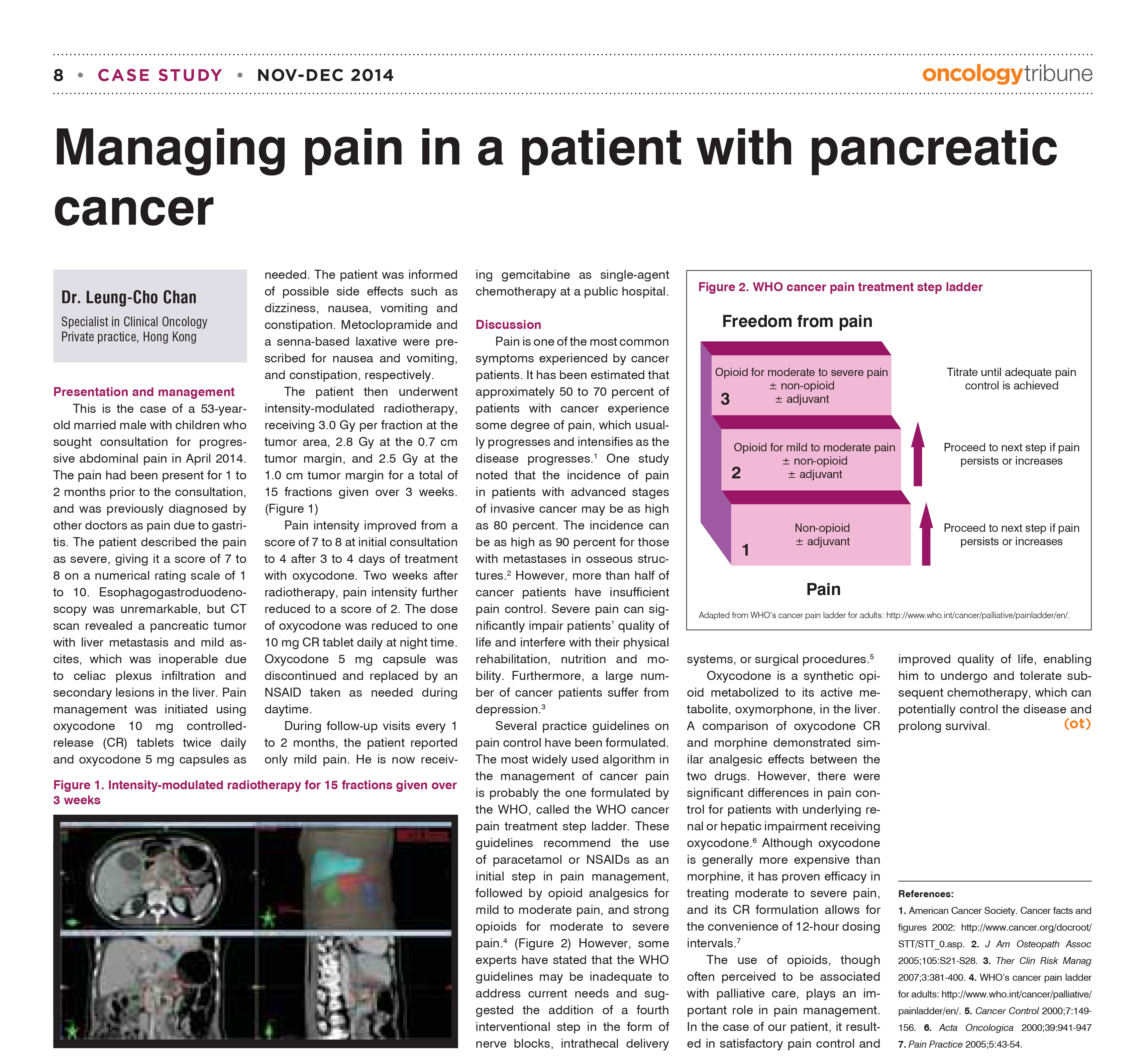