Treatment for advanced colorectal cancer (CRC) has evolved over the years, particularly recently with the addition of novel targeted agents to chemotherapy. There are now several treatment combinations and treatment sequences from which patients can benefit under a continuum of care. This case describes a patient with metastatic CRC (mCRC) who initially received upfront capecitabine-oxaliplatin with bevacizumab. Due to poor disease response, she was switched to another cytotoxic combination with a targeted agent and has demonstrated a response.

The patient is a 63-year-old female, with good functional status, who presented to the clinic in February 2014 with right upper quadrant pain. Upon further investigation, she was found to have stage IV CRC with multiple metastatic liver lesions. The tumour tested positive for KRAS mutation. At the time of diagnosis, the tumour was deemed unsuitable for resection and, consequently, the patient was offered combination cytotoxic chemotherapy with the targeted biological agent bevacizumab. The patient initially requested foregoing bevacizumab treatment to avoid the potential side effect of bleeding. She also requested foregoing a convenient regimen and consequently underwent three cycles of capecitabine with oxaliplatin, or XELOX (capecitabine, 1,400 mg twice a day from days 1 to 14; oxaliplatin, 170 mg given every 3 weeks) as an outpatient.

A follow-up positron emission tomography-computed tomography (PET-CT) scan showed only minimal tumour response (Figure), and her carcinoembryonic antigen (CEA) level had increased from the pretreatment level of 130 ng/mL to 190 ng/mL. The patient agreed to add bevacizumab (350 mg/cycle, given every 3 weeks) to XELOX at the fourth cycle. After a total of six cycles of XELOX, however, only a small decrease in CEA was seen, Second-line treatment options with other chemotherapy combinations were discussed with the patient, and she continued to stipulate a preference for outpatient treatment. From July 2014, the patient received irinotecan (260 mg) with the addition of the targeted agent aflibercept (200 mg/cycle, given every 2 weeks) to optimize tumour response. Capecitabine was not used because she had thrombocytopenia during the XELOX regimen.

The CEA level decreased to 30 ng/mL at the third cycle of second-line therapy, and to 13.3 ng/mL after the sixth cycle. Furthermore, following the sixth cycle, her tumour responded with marked decrease in size and in fluorodeoxyglucose (FDG)uptake of liver lesions (Figure). The patient developed neutropenia (but no fever); otherwise, she tolerated her treatment well. She had earlier received granulocyte colony-stimulating factor (G-CSF) for chemotherapy support.

The continuum-of-care approach in CRC emphasizes individualized therapy that exposes patient to different combinations of cytotoxic and targeted agents. Physicians can utilize, discontinue, or re-use agents across several lines of treatment, according to factors such as: treatment goals; patient preference; patient’s general condition; disease characteristics; and efficacy and tolerability profiles of the drugs. However, the choice of first-line treatment affects which subsequent treatment options can be used, and physicians often undergo an intensive discussion of benefits and risks with patients and their families before each treatment decision.

Patients with unresectable disease but without other tumour-related symptoms are generally offered a doublet cytotoxic regimen, such as oxaliplatin with a fluoropyrimidine, and a targeted agent, for disease control. Current clinical evidence favours bevacizumab in the first-line setting, but KRAS wild-type tumours may benefit from an anti-epidermal growth factor receptor antibody. Upon progression, oxaliplatin or irinotecan may be offered in a sequential manner, along with a targeted biological agent. As second-line treatment, the clinical benefit of the antiangiogenic agent aflibercept was demonstrated in VELUR, a phase III, randomized, placebo-controlled trial. Aflibercept with 5-fluorouracil, leucovorin and irinotecan (FOLFIRI) significantly improved overall survival (13.50 versus 12.06 months; hazard ratio [HR] 0.817; 95% confidence interval [CI] 0.713-0.937; p smaller than 0.0032) and progression-free survival (6.90 vs 4.67 months; HR 0.758; 95% CI 0.661-0.869; p smaller than 0.0001) in patients with mCRC previously treated with an oxaliplatin-based regimen, including those who had received bevacizumab. In the present case, the distinct mechanisms of action of irinotecan and aflibercept may have contributed to the patient’s good response. Her regimen appears effective and is also particularly suitable for patients who have a preference for convenient outpatient treatment. 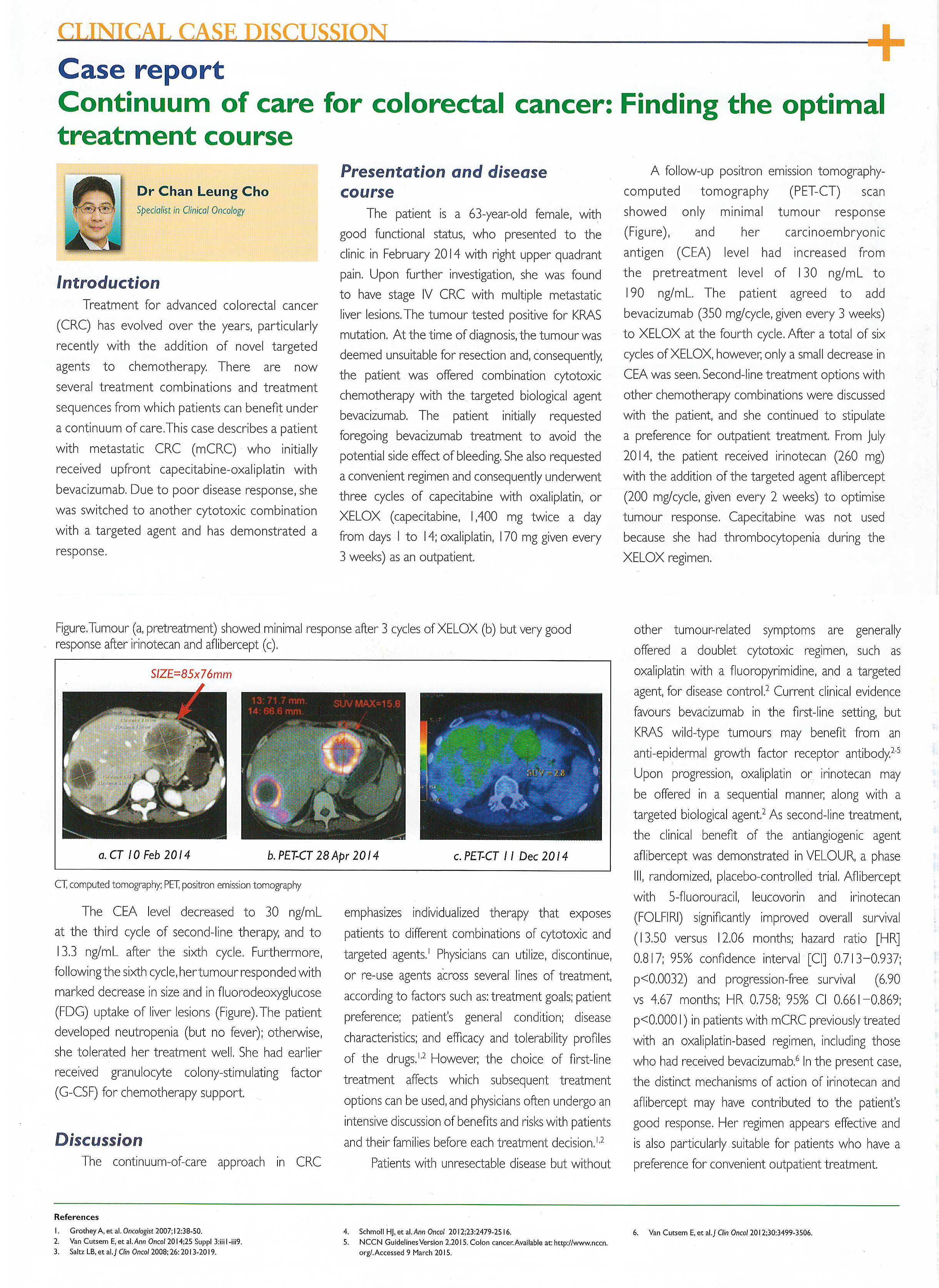